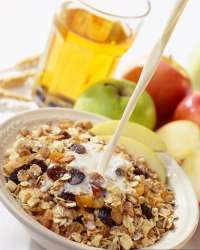 We all know sugary treats are bad for our teeth.

But drinking a glass of milk with sugary cereals or snacks can neutralise the effect, a study found.

Milk is better than water at preventing the bacteria in plaque from producing acids when they are feasting on sugar, researchers said.

Got milk? Having a glass of milk with sugary snacks or at the end of a meal can neutralise the effect sweet foods have on the enamel

By stopping the bacteria from churning out acid, tooth enamel is protected, meaning decay and caries are less likely to develop over time.

The researchers said: ‘Eating dairy products in combination with other sugary snacks or at the end of a meal may be an effective means of caries prevention.’

The scientists at the University of Illinois in Chicago gave 20 healthy people a bowl of sugary cereal to eat, then measured the level of acidity of the plaque on their teeth.

The more acid being made by bacteria in the plaque as they feast on sugar, the more likely teeth are to rot over time.

Measurements were also made after  the volunteers followed the cereal with  a small glass of tap water, a drink of milk or apple juice.

The scientists at the University of Illinois in Chicago gave 20 healthy people a bowl of sugary cereal folowed by apple juice, milk and water then measured the level of acidity of the plaque on their teeth

In all cases, the mouth became more acidic after eating the cereal. However, the milk quickly neutralised the acid.

Water was the second most effective drink and apple juice the worst, the Journal of the American Dental Association reports.

In addition, the calcium in milk should help strengthen teeth weakened by acid. The researchers also said that the potential of fruit juice to contribute to dental decay is not emphasised enough.

However, Nigel Carter, of the British Dental Health Foundation, urged parents to steer children away from sugary breakfast cereals.

And he said people of all ages can benefit from not snacking too much.

Over time, our saliva gradually neutralises acid made after sugary foods. But if we eat snack after snack, acid levels remain high.

Dr Carter said: ‘Chocolate, biscuits, cakes, dried fruit, soft and fizzy drinks, along with squashes, are all high in  sugar which can lead to decay or damage tooth enamel.’