Woman arrested for collecting nearly $500,000 from Boston Marathon fund by claiming that she had a brain injury from the blasts… but she wasn’t even in the state END_OF_DOCUMENT_TOKEN_TO_BE_REPLACED

Daughter LIFTS 5,600-pound Jeep in an amazing feat of strength after it falls on her dad

‘I just wanted us all to be together’: Chilling words of crazed mother-of-two ‘who attacked daughter, 9, with electric HEDGE CLIPPERS and nearly severed her thumb before trying to commit suicide’ 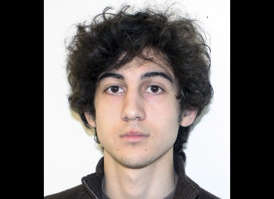 ‘I don’t like killing innocent people’: ‘Boston bomber‘ Dzhokar Tsarnaev’s boat confession letter is revealed as he’s indicted on 30 charges – 17 of which carry the death penalty

END_OF_DOCUMENT_TOKEN_TO_BE_REPLACED

Homeland Insecurity: The White House assures that tracking our every phone call and keystroke is to stop terrorists, and yet it won’t snoop in mosques, where the terrorists are.

That’s right, the government’s sweeping surveillance of our most private communications excludes the jihad factories where homegrown terrorists are radicalized.

END_OF_DOCUMENT_TOKEN_TO_BE_REPLACED

A 2,500-year-old Egyptian mummy is coming out of its coffin to undergo cleaning and restoration procedures at Massachusetts General Hospital today.

The mummy known as Padihershef has been on display at the third oldest general hospital in the United States since it received him as a gift from the city of Boston in 1823 as a medical oddity. A conservator trained in restoring ancient artifacts will remove him from his coffin today and use cotton swabs to wipe away salt deposits from his face.

Aging gracefully: Egyptologist Mimi Leveque begins to remove salt deposits from the face of a 2,500 year-old mummy at Massachusetts General Hospital in Boston

END_OF_DOCUMENT_TOKEN_TO_BE_REPLACED

Imagine if a high-profile conservative joked about how God targeted Boston by its marathon bombing because it’s liberal and how God used Sandy hurricane to punish liberal New York and New Jersey. Imagine the outrage and non-stop demand for apology from the liberal media. But liberal Daily Show co-creator and former head writer just could not resist tweeting at 3:00 p.m. , “This tornado is in Oklahoma so clearly it has been ordered to target conservatives.” Her lame liberal “political joke” was an attempt to comment on the Obama IRS scandal wherein conservatives were targeted like enemies of the state with Obama using IRS and DOJ as his Gestapo. The insensitive tweet caused stream of angry responses which the comedian ignored and answered back at first.

The unrepentant no-name comedian Winstead defended her tweet by saying, “If it’s not OK to YOU for me to combine news stories to point out hypocrisy AND I’m not making fun of victims.” Three hours later after she saw the damaged, or maybe because she felt pressured by others, Winstead decided to apologized deleted her tweet. By that time, her three-hour belated apology regarding her so-called “political joke” too late to take back. But Lizz Winstead should be happy that while other people called her “numbskull” and among other names, Glenn Beck told the angry followers to leave her alone. Just telling Glenn Beck, if ever he joked like that liberals won’t remember his kindness to Miss Winstead at all. And I don’t think she appreciates any sympathy or defense that comes from someone like Glenn Beck.

Seven Middle Eastern men were caught Tuesday shortly after midnight trespassing at the Quabbin reservoir, one of the country’s largest man-made water supplies and also of Boston’s. The seven who were arrested for trespassing told police they are chemical engineers and recent graduates. They cited “education and career interests” for visiting the reservoir in the middle of the night. The seven nationals came from Pakistan, Saudi Arabia and Singapore – countries of origin of the 15 out of  19  hijackers of 9/11. Police have not released their names because no court date has been set yet which they are expected to appear to court for trespassing.

The midnight stroll and career enhancement activity by the seven chemical engineers did not get them charged by state police of any criminal activity except for trespassing. Interestingly, a 26-year-old chemical engineering student named Ahmed Abassi  from Laval University in Quebec was arrested by FBI last month in New York for plotting to kill as many as 100,000 Americans by contaminating air and water supply in a major U.S. city. He was found out when he confessed his plot to an undercover agent. Abassi also radicalized two Muslim Canadians who planned to derail a passenger train used by Americans and Canadians for transportation. Boston’s  medical examiner who conducted the autopsy of the dead body of Boston Marathon bombing suspect Tamerlan Tsarnaev had completed the autopsy and reported that nobody had come to claim the corpse in the . Tamerlan had his uncle, sisters and his wife as the surviving relatives who are in the country.

According to statement released by his wife’s attorney Katherine is still in shock with regards to the involvement of her husband and brother-in-law with the Boston bombings. His sisters in New Jersey according to their lawyer are also devastated and his mother who is still in Russia may not return to the country but suggested that her husband might go.

A graphic photo of Tamerlan’s dead body was leaked last Friday by an unknown identity and went viral in popular websites like Reddit and 4chan . Beth Israel Deaconess Medical Center denied that any of their staff took the photo. According to The Smoking Gun Tamerlan died at 1:45 AM. His brother is still in the hospital and doing “fair” according to doctors.

While Obama just shut down the White House tours due to supposed budget cuts, National Institute of Health ( NIH ) just splurged a hefty sum of $1.5 million to study why three-quarters of lesbians are obese while male gays are not. The study will focus on the relationship between overweight and sexual orientation. The Obama administration is the most gay obsessed administration in history, picking up every gay card and leading the advocacy while America is still suffering from the most sluggish eonomic recovery in history.

The grant was given to Brigham and Women’s Hospital in Boston with the grant descriptiion describing obesity as “one of the most critical public health issues affecting US today” , an issue of “high public health significance.”

I could have spared the taxpayers $1.5 million if NIH asked me the reason why. The answer is simple : men are expected to be buffed up while women are expected to be thin. Since lesbians want to be men, they need to lose their womanly curves and they do that by gaining weight. Men/lesbian culture could care less about appearance – that obsession belongs to the other side, the world of women/gay. Gays want to be thin if they want to put on a sexy dress and want to look good on their jeansand shirt.  It’s just considered fashionable among gay/women culture to be slim. If my analysis is correct, NIH just wasted $1.5 million.Next time tell Obama I’ll do it for half the price, that is $750,000, and I’ll even give half of that to the Democrat party. And this took me only five minutes to draft.