The United States of America has always been a land of immigrants . But there’s a different attitude from the new wave of immigrants that’s been coming to the country in the recent decades thanks to the voter-hungry kowtowing politicians in Washington D.C. who set the tone on how the new immigrants should behave inside the country.

END_OF_DOCUMENT_TOKEN_TO_BE_REPLACED

A riot that started in Husby , a Stockholm immigrant suburb, five days ago is becoming Sweden’s worst riot in years. The organized riots by young angry Muslim immigrants are calling for more generous welfare from the Swedish government in order to close the “poverty” gap and bring equality and fix the high unemployment rate among the young immigrants. The acts of violence according to a local government official is “not normal”. Majority of Sweden’s immigrants are from Muslim countries like Afghanistan, Syria, Somalia and today 15% of Sweden’s 9.5 million population are foreign born.

In the past five days, schools were set on fire, 30 cars burned overnight, police station and buildings were vandalized and garbage cans burned across the suburbs while they throw rocks at police authorities. Although Sweden is well known for its very generous welfare package to  its immigrants, the angry youth are accusing the Swedish people of racism by not hiring them at workplace they apply due to their ghetto address. In Husby, almost 50% of junior high students have grades too low to be accepted into high school. The rise of Muslim ghettos in Sweden have resulted to segregation and resentment from Muslim immigrants.

Recent government study showed that a third of the young people in Muslim neighborhoods from 16 to 29 years old neither study nor have a job. They also have an unemployment rate of 16%, compared with 6% for the native Swedes. Sweden’s high taxes provide 480 days of parental leave per child, free housing, Swedish lessons, free university and a small subsidized allowance, free healthcare, etc. The left wing papers in Sweden are blaming the tax cut and reduced state benefits for the riots and the rise of immigrant ghettos in the cities. But Prime Minister Fredrik Reinfeldt says the problem has existed even before he was in the office and also citing the burden of  government’s generous welfare system  impossible to carry. 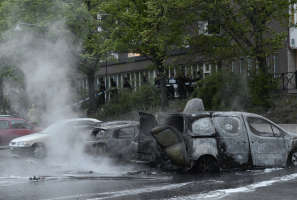