They’ll give you some tips! Brad Pitt meets U.S. soldiers at military camp as he learns to drive a tank for new movie role END_OF_DOCUMENT_TOKEN_TO_BE_REPLACED 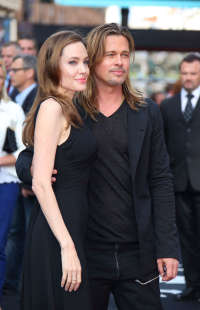 He’s currently on a global whirlwind publicity tour for his film World War Z. But Brad Pitt made time for an intimate Japanese meal with his daughters Zahara and Shiloh in Madrid on Friday. The 49-year-old actor sipped a glass of beer as seven-year-old Shiloh arranged everyone’s chopsticks and eight-year-old Zahara dug into an appetizer.

His lil’ leading ladies: Brad Pitt made time for an intimate Japanese meal with his daughters Zahara and Shiloh in Madrid on Friday

END_OF_DOCUMENT_TOKEN_TO_BE_REPLACED

He has been busy on a worldwide tour to promote new blockbuster movie World War Z. But Brad Pitt was taking a well-earned break on Thursday to spend some time with daughters Zahara and Shiloh. The little girls strolled alongside their famous father in Moscow ahead of his appearance opening the city’s International Film Festival.

END_OF_DOCUMENT_TOKEN_TO_BE_REPLACED

The Brangelina clan celebrated the matriarch’s 38th birthday on Tuesday at a sushi and grill restaurant Kuchi in Berlin. Angelina Jolie and Brad Pitt, who’s busy promoting his new zombie flick World War Z, took a day off to have a family celebration on Angie’s birthday.  Locals stood outside to take pictures and get a glimpse of the mega-couple and their six brood. The family arrived at a restaurant at 9:30 pm and stayed there for three hours.

The family ordered ramen, dumplings and sushi according to insider, and a strawberry pudding cake was brought out as the kids sang “Happy Birthday” to their mom. People magazine reported that Brad gave Jolie a surprise birthday dinner in Paris on Monday at the high-end restaurant II Vino. Angelina just had a double mastectomy after she found out she’s carrying the deadly BRCA1 cancer gene. The Brangelina children are Maddox, 11, Pax, 9, Zahara, 8, Shiloh, 7, Vivienne and Knox, 4. The power couple, according to insider, looked very happy during their dinner and also said that the kids were well behaved.

Men are visual creatures and no matter how old they are, they would always notice a good looking woman passing by unless they are blind or gay. But according to online surveys,  men are not looking for celebrity-packaged women but actually want average looking women. Men are realistic and they know unless they are Brad Pitt, no way they can get all the Angelina Jolies of this world. They also know a celebrity-looking-packaged  woman may come with a huge price tag of constant high maintenance, mirror absorption, self-absorption, queen-bee mentality, prone to lateness and histrionics, and may be more concerned about breaking her nails rather than breaking his heart.

Smile because that’s the first thing a man would notice and the most important physical adornment  of any woman. Men wants a woman who has a happy countenance, someone who smiles naturally. They like to be around a happy woman. They would see that woman as fun to be with, a sunshine that would bring light to their days, someone they want to keep for good. But a woman who looks like she swallowed a lemon and forgot to spit it out is negative looking to any man. Not only a dour looking woman signals an unhappy person but also speaks of many other possible troubles lurking beneath that unhappy face. That’s why men considered women’s eyes as women’s most attracted feature because it’s the window to our soul- it reveals the amount of light or darkness, the humor, the pain, the bitterness, the inner soul. Smile can make any woman look attractive. It’s the easiest way to improve one’s appearance.

But more than physical beauty, men want the inner beauty. The most beautiful woman can become ugly to any man because of her character. A beautiful looking woman who is selfish, critical, rude, disrespectful, whiny and childish would become repulsive and unattractive. Instead of wanting to be with her, men would find any excuse to be away from her. Men are attracted to women with self-confidence, but not bossy or dominant. A bossy woman tend to be in a constant fighting mode, always holding a score card making sure “equality” is being imposed in the battle of the sexes. Bossy women tend to be also critical but highly sensitive when criticized.  They are also quick to tear men down but hardly try to build them up.

Men don’t mind being told they are wrong- and one time is enough. They never get tired of back rubs (even if it’s just two minutes), unexpected hugs and kisses and cooking their favorite food. Traits both men and women want are honesty, gratitude, loyalty, kindness, thoughtfulness, etc. Everything that is good, we know without asking we all want it.

Men want a woman of substance because in the end they would want a woman who’s not only going to become their wife but also the mother of their children, their partner, long time companion, inspiration, friend, lover, someone they can be a hero to.